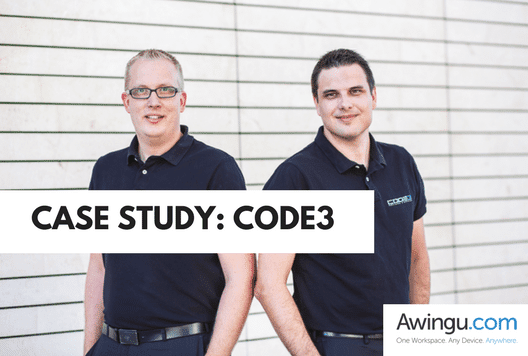 CODE3 is a German independent software vendor (ISV) that was founded in 2012. As a business, they develop and sell their “fireplan” software to fire departments all over Germany and other German-speaking regions. In essence, fireplan is an ERP for fire departments: it provides fire departments and municipalities the ability to document and bill any kind of incident and keeps track of educational and personal documentation, such as training schedules and health and equipment checks.

By default, fireplan is installed on premise. Yet, the increasing proliferation of new device types (e.g. Mac OS or Linux), and the need for mobile access is also growing in fire stations. CODE3 used to leverage on Azure RemoteApp to provide mobile access to their end-customers. However, as of August 2016, Microsoft announced the discontinuation of the Azure RemoteApp service, meaning CODE3 needed to find a suitable alternative.

Awingu as the solution

By replacing Azure RemoteApp with Awingu, CODE3 ensured easy, fast and safe access to their software on every platform. Be it either in municipalities with limited internet access or in fire stations that deployed operating systems different from Windows, the Awingu platform helped enable a connection to fireplan that works even smoother than if it were installed on premise. CODE3 tested Awingu All-in-One on the Azure Marketplace. “Our trial on the Azure Marketplace worked remarkably good from the start, and that really convinced us”, says Bojan Slegel (one of the co-founders of Code3).

CODE3 chose Awingu to resolve their issue because of the following reasons:

Are you also an ISV looking for a replacement for RemoteApp Service? Awingu is your solution! Contact us or launch a 14-day free-trial!