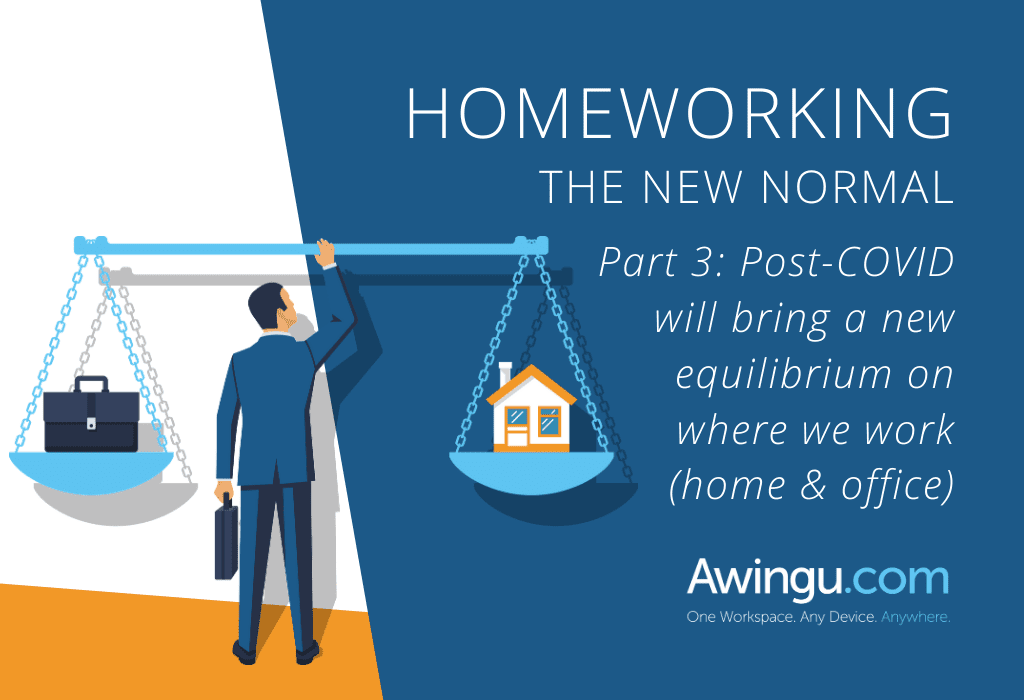 As homeworking became the norm over the past 5 months, there is reason to believe that the attitude towards ‘where work can and/or should happen’ has changed drastically. If anything, the COVID-19 pandemic has illustrated the flexibility of both employers and employees on the one hand, and the validity of homeworking as a serious and beneficial concept on the other. Will this trend continue? Or do we return to the old ‘work is a place’ axiom? As the title of this blog post suggest, we believe a new equilibrium is in the making, with homeworking gaining a lot more ground.

In two recent polls we held on our social media channels, 124 people responded as follows to the question about their future workplace:

“After the pandemic, do you think you'll work more often from home/remotely?”

If you would ask our audience, going to the office becomes a relic of the past! Of course, we are aware that Awingu followers a priori show a keen interest in the concept of the digital, anywhere workplace. However, other studies confirm that office-loving workers are, in fact, a minority:

For decades, companies large and small have been investing in making the physical workplace as attractive as possible. Emblematic ping pong table and fancy cafeterias only confirmed the “you should go to work” axiom by associating positive feelings to that specific place. The best example of this is the flexible workspace, which originates from the idea that you can work anywhere and in any way you want, as long as it’s between these four walls. The workplace needed to resemble home to uphold the office mentality, then why did it take a pandemic to turn that idea 180 degrees and make home resemble the workplace?

Either way, the shift was already happening. After all, recent studies have shown time and time again the home workers are more productive, work more hours and happier. Oh, and did I mention they are more productive? But even as the homeworking (r)evolution took place, no one could expect the recent crisis – which shifted the trend’s gear to the max: nearly two thirds of the U.S. workforce worked remotely in the early stages of the pandemic. Many previous assumptions, such as the correlation between physical interaction and productivity, were shattered.

Even as things are becoming ‘the new normal’, it is important to know that it will continue for a while. As Nathan Pettijohn (Forbes) puts it:

While some may argue that sustaining and building a corporate culture relies heavily on having people interacting in person, it is unlikely that a return to the old normal is going to happen anytime soon. New office layouts are likely needed to distance people, masks may still be required, and there could be a need for regular commitments to temperature checks or testing. This sort of dystopian workplace environment hardly sounds like a catalyst for inspiration or an improved company culture.

That makes perfect sense, and it does not look like things will change for the foreseeable future. However, we must also consider what happens to ‘work’ when this is all over. Will the mentality of people have changed after adapting a new (and some might say improved) working habit for many months (or years, depending on what the future brings)?

Not all jobs are equally suited for homeworking

Let us address the obvious: no, not all jobs are equally suited for (even part-time) homeworking. Many if not most blue-collar jobs such as construction workers, store clerk, gardeners, etc. have a job content that is very much bound to a place.

Not all white-collar work is equal either. A division line has to be drawn between those jobs where physical interaction is integral (doctors, teachers of younger children, etc.) and those where it is not. The latter group is the one we should be focusing on when considering the continuation homeworking, as there is location nor ‘real-life’ people and tools other than office equipment that they need to fulfil (close to) 100% of what is expected of them. These are also typically the people that go to the office, work at their desk or in meeting rooms and clock out at 5:30. Note that (especially in the US and Western Europe) this group is the lion’s share of the entire workforce. As we noted in our previous blog post about homeworking:

In the US, the World Economic Forum estimates “around a quarter (24%) of workers in ‘management, business and financial’ occupations – such as corporate executives, IT managers, financial analysts, accountants and insurance underwriters – have access to telework. So do 14% of ‘professional and related’ workers, such as lawyers, software designers, scientists and engineers.”

However, “only 7% of civilian workers in the United States, or roughly 9.8 million of the nation’s approximately 140 million civilian workers, have access to a ‘flexible workplace’ benefit, or telework”, according to the 2019 National Compensation Survey (NCS) from the federal Bureau of Labor Statistics.

These (pre-covid) numbers highlight two things: firstly, that ‘having access to telework’ does not mean actually doing so. Secondly, that there is a vast number of employees that could theoretically (or practically, even, as demonstrated during the pandemic) telework but do not have access to it. A study by Dingel & Neiman (2020) estimates that 37% of jobs can do be performed from the living room full-time – a number that is likely to rise a lot if we account for jobs that could do the necessary  ‘on-site’ work in a few days and work from home the other, i.e. the equilibrium that you should strive for.

Towards a new equilibrium

When everything returns to normal – and even before that – employers and employees alike will face a new reality: one where teleworking has been tried, and where it has proven to be successful. Widely considered a win for all parties involved, we believe that you must try to find a healthy balance between office and homeworking – and, more importantly, reassess the role of the office as a workplace.

Planning is the key to an effective equilibrium. Avoid spending office time ‘for the sake of being at the office’, rather than with a specific purpose in mind. Evaluate your tasks and meetings individually and map them to the offline/online dichotomy. Working on a project by yourself behind a screen the entire day is a clear teleworking candidate, whereas brainstorming sessions are far more effective with physical interaction in a meeting room.

Finding an equilibrium that works is company-specific and employee-specific. Many variables will play a role in deciding upon the typical number of days spent working from home: age & family situation, company structure (start-ups versus large enterprises), job content, team size, seniority, etc. The golden ratio may be different for everyone, but one thing is certain: the future is one where homeworking will cover a lot more ground than it does today.

If successfully implemented, the home/office hybrid brings the best of both worlds: enough time for necessary touchpoints and human interaction, a more focused approach to dividing your working hours appropriately, higher levels of productivity and an overall happier workforce.