Microsoft announces Azure Virtual Desktop (AVD/WVD): why should we and you care?

On March 21st, 2019, Microsoft announced the public beta release of ‘WVD’ – “Windows Virtual Desktop” in full. It’s kind of a big thing for Microsoft, and perhaps for the entire industry. In this blog post, we’ll give insight into what WVD is, and what it isn’t. Furthermore, let’s take a look at how it compares to Awingu.

Let’s start with the beginning. What is WVD?

Let’s have a little history lesson first. Since 2017, Microsoft has been working on RDmi (Remote Desktop Modern Infrastructure). Initially, this was supposed the be the evolution of RDS with on-premise & Azure flavors, where the Azure flavor was to become an RDS PaaS platform. This project got some turns and twists and became what we now know as WVD. The most plausible drivers for this decision are competition and the fact that RDS workloads generated roughly 10% of all Azure consumption. Those workloads were purely driven from partner & ISV initiatives. (source)

Making it very simple (cutting a few corners in the process): WVD offers multi-session Windows 10 VDI on Azure, where the RDP components of the infrastructure are run as PaaS service and are managed by Microsoft. WVD can also be used to access RDS-based applications and desktops, but for the sake of simplicity, this post will focus on the VDI part (as WVD doesn’t bring a lot of benefits for RDS-based environments).

For the sake of semantics. When we refer to ‘RDS’ we mean a connection to a Windows Server OS. When we write VDI, we mean a connection to Windows Client OS. For the sake of this post, Windows 10 multi-session is seen as an evolution of the ‘VDI’ scenario. We understand this perspective can be confusing, but we feel this is the best way of positioning WVD in the bigger picture.

The ‘multi-session Windows 10’ bit is actually interesting as it can decrease the infrastructure and licensing cost for VDI (i.e. the connection to the Windows 10 client OS). This multi-session version will, however, only be available on Azure. It is still to be confirmed if this will only be accessible as a part of WVD, or if you would be able to consume multi-session Windows 10 without the WVD layer on top. To be clear: it will not be available on other public clouds, nor in private clouds. In those instances, you will require using single session Windows 10 for VDI, or Windows Server-based deployments (i.e. RemoteDesktop and RemoteApp using RDS). Users can access their Windows 10 instances by installing the latest version of the RDP client on their device, or by using RDWeb. This client will use WVD’s ‘reverse connect technology’. Older versions of RDP clients will not work.

In terms of licensing, Microsoft has announced WVD access and multi-session Windows 10 will be part of Windows 10 Enterprise licenses (e.g. Windows 10 Enterprise E3/E5 and Microsoft 365 E3/E5). The hosting of WVD services on Azure is ‘part of the price’. However, the consumption of your VDI VM’s is not: you will still pay for those. Note: if you want traditional RDS access (i.e. remote access to Windows Server), then the RDS CAL will still apply, also in the WVD scenario.

WVD is expected to go live in the US market first. If we need to guess, the Microsoft Inspire event in Las Vegas in July ’19 will be the chosen momentum for Microsoft. In a second phase later in Microsoft’s fiscal year we expect Europe and some other regions to be added.

Where some things might still change between what we know today, and what will be launched, it seems clear that WVD is a “v1”. There is no back-end automation to optimize your Azure consumption, there is no automated FSLogix deployment, etc. Yet. We’re sure these will follow later in time, but they are not here yet.

How does Awingu compare to WVD?

This is one of the frequent questions we have been getting in the last couple of months. The reality is that Awingu & WVD are different things. At a high level, the following gives an overview: 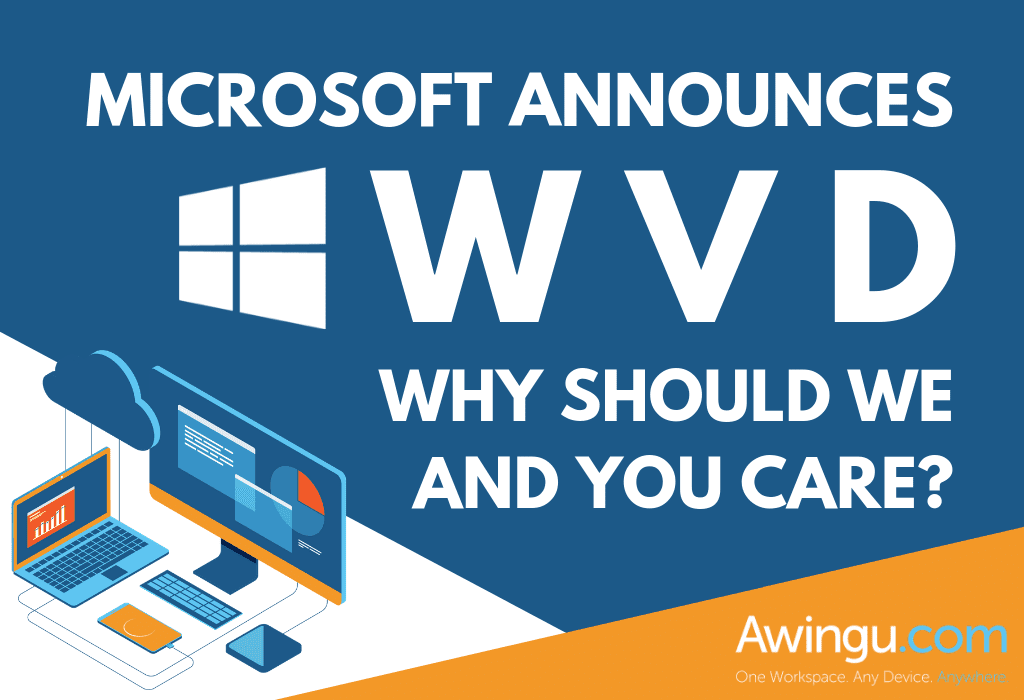