We can only assume Microsoft wanted to give some extra wind to its Windows Virtual Desktop offer, and only support running Office 365 ProPlus in Windows 10 enterprise (multi-Session). This, however, meant it was supported only on Azure. With official support on Windows Server 2019, Microsoft now also enables businesses and “hosters” to provide a hosted version of Microsoft Office. The good news, in other words, is that Windows Server 2019 is now also an officially supported platform for Office 365 ProPlus.

What are the options to run “Office” apps?

For the sake of simplicity, in this overview, we will focus on running the ‘fat’ client version (Office 365 ProPlus) of the popular Office suite. Users with an Office 365 subscription also have to the online ‘Web App’ version of the service, and this is available independent of below-chosen scenario.

1. Without Server Based Computing (i.e. install everything on your local computer). Note: Here we make abstraction of the classic perpetual licensing model and only focus on Office 365.

2. With Server Based Computing (i.e. install the desktop apps on a central infrastructure and get remote access from ‘any device’)

Important: with the acquisition of FSLogix by Microsoft, Microsoft can now provide a much better experience to run Office apps in virtual environments. And this without any additional costs as FSLogix is part of the RDS CAL and a lot of other licenses (read this blog post for more info).

Office 365 ProPlus & Office 365 Business are pretty similar products. Both of them provide access locally on your device and in the Microsoft Cloud to Word, PowerPoint, Excel, … They can be installed on up to 5 devices per user, and, the software can be upgraded to the latest version at any time. Both models are also part of a subscription license.

For Awingu customers, all of the above scenario’s can apply.

Power users will want to use the ‘full’ version of the Office apps. Here, it will typically be deployed as RemoteApp. Service Providers will typically opt for the SPLA model. Businesses and Enterprises for the Office 365 ProPlus based suites.

For ‘light’ users, Office 365 Web Apps can also be used. Here, the Single Sign-On capability between Awingu and Office 365 can be leveraged. End-users will still use Awingu as their Unified Workspace and launch the relevant web apps from there.

Hybrid scenarios can also exist where users deploy a version of Office 365 ProPlus on their managed PC (e.g. office Desktop), and, access the remote version on BYOD devices. (the Office 365 ProPlus license gives access on 5 devices for the same user. The RemoteApp version would count as one of the five devices).

All of the Office 365 flavors have OneDrive access included. It’s good to know that OneDrive can be added into Awingu also next to other file shares. As such, creating a blended end-user experience and file access cross-device and location. 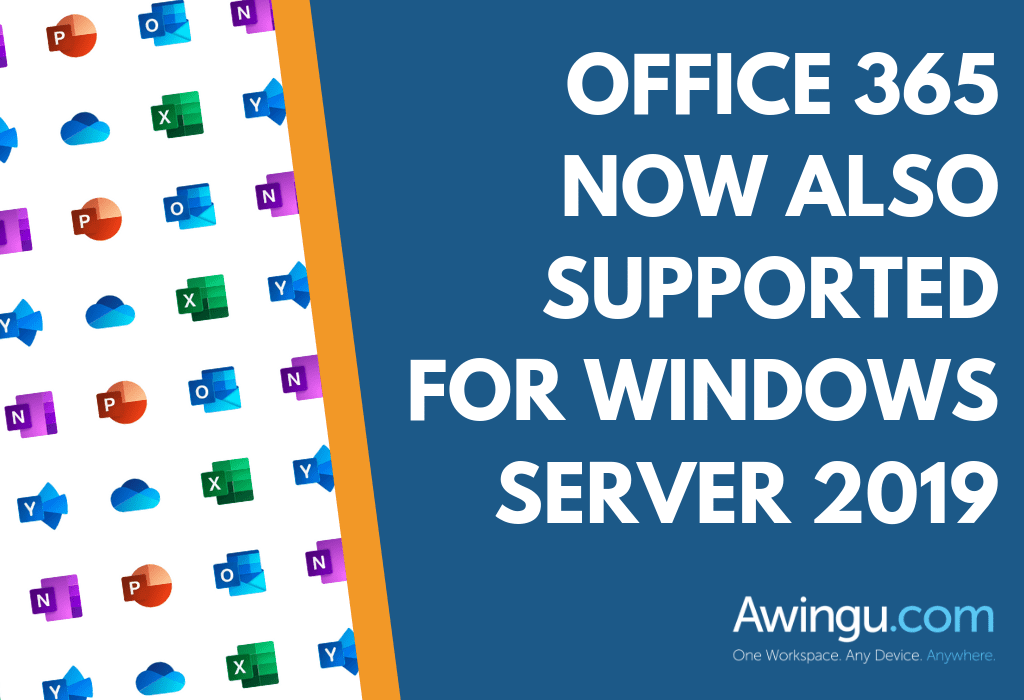